Back in 2016, Microsoft released a password recommendation paper based on Microsoft's Azure experience (seeing millions of username and password attacks per day). In the paper, they highlight that long passwords can mitigate the desired intent of security by:

Microsoft has also found substantial containment of stolen identity in stolen credentials for SaaS applications could be mitigated by multi-factor authentication.

In this blog series, we will examine different aspects of enabling  two factor authentication (2FA) for Office clients. The first we will review is the end client.

Even when it comes Office, support for ADAL must be reviewed. If you look at Table 1 below for Outlook clients, you will see the only native version of Outlook which would support MFA out of the box would be 2016. 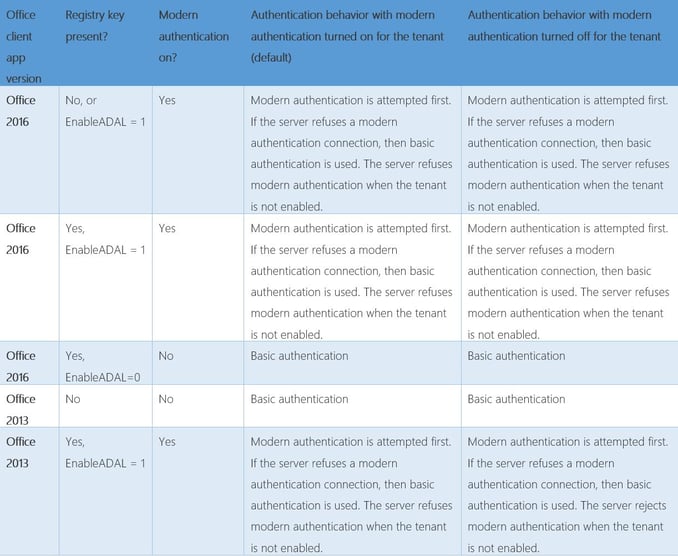 So office 2016 is enabled by default, office 2013 would need to have the switch in the user portion of the registry toggled to enable the feature. Outlook 2010 falls in the same category as native versions of ActiveSync, which relies on basic authentication.

While we can acknowledge the value in 2FA in providing real value in securing user identities in a SaaS suite like Office 365, we can see the consumer applications of this suite (in this case OWA, Outlook, and ActiveSync) but have different experiences depending on the versions the end users are using.

While Microsoft has produced a band-aid for this, in the next article, we will discuss applying MFA globally relative to conditional access ( a more selective approach).